Anna
I’ve made a lot of mistakes in my life. In fact, some of them almost ruined me. But I am a good person. I want to make amends. I want to fix things with my sister and finally have my life back. I want to change, and I’m trying. But I just can’t let the past go.
Reaper doesn’t make it easy for me. He hates me with a passion. He’s vowed to do whatever he can to get me out of my sister’s life and away from his club. It doesn’t matter. He won’t stop me. No matter how terrified of him I am, nothing is going to stop me from changing my destiny and trying to fix the wrongs from my past. Especially when my secret is discovered, giving him all the ammunition he needs.
Reaper
After what seems like an endless stream of problems, things are finally going well with the club. We’re finally getting back to some semblance of normal after the chaos she brought with her before she was sent away. But now she’s back.
She says she’s changed, and maybe she has, but I don’t care. She is the reason it all started, and she’s not welcome here. I will stop at nothing to get her out. I won’t rest until she’s gone. Her beauty will not distract me, and her history doesn’t even matter. I will get Anna away from my club, or die trying.

Geri Glenn is the Amazon best-selling author of the Kings of Korruption MC Series.
Geri has been an avid reader for as long as she can remember. She can usually be found curled up in a comfy chair, reading on her iPad both day and night. Geri is an incurable night owl, and it’s not uncommon for her to still be awake, reading at 4 am, just because she can’t put the book down!
Geri loves all genres of fiction, but her passion is anything romantic or terrifying; basically anything that can get her heart pumping. This passion has bled out onto her laptop, and became the Kings of Korruption.
Writing that first book in the series knocked off the #1 thing on Geri’s bucket list, and publishing it has been an absolute dream come true. She hopes you love the Kings as much as she does.

My Review of Reaper by Geri Glenn
My Rating 4.5 Stars

Reaper and Anna, what an amazing story that sucked me in and had me wanting more.
Anna’s character was one that you knew going in that you were not going to like her, because of her past discretions.
Reaper not being one to trust or give second chances too, wants Anna out and away from his brotherhood.
Two people each with issues of their own come together in this story and Geri has written this book so well, that I had many emotions while reading. This is a story you will get the feels with.
Just when you think you have laid your past to rest, and it comes back with a vengeance that tries to consume you. This is what happens with Anna, and the journey to redemption never was easy but, with a man like Reaper who knows, it might just be worth it!
If you haven’t read this series I’m not sure what you’re waiting for! I highly recommend you get started!!
** I voluntarily reviewed an Advance Reader Copy of his book in exchange for an honest review from Author & Enticing Journey Promotions **

View all my reviews 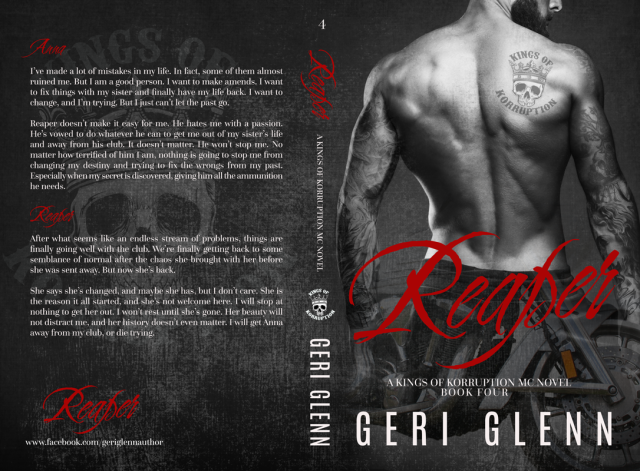 This is a place where you can get; Book Reviews , Cover Releases, Book blitz and Author Spotlights, Teasers, Author Takeovers plus giveaways , and so much more !!!!

I've always had a love for books and reading so it only makes sense to share this love with other readers.